There’s no place like home… and our encounter with the “Tiny House” had the G.O. and I contemplating dwelling dimensions.

On a recent Sunday we spent a pleasant Sunday morning browsing Marrickville Organic Food & Farmers Markets which shares its location at Addison Road Community Centre with a variety of community groups including The Bower Reuse & Repair Centre which in the lead up to the September 20 auction hosted the “Tiny House” a house made entirely from reclaimed materials.

The “Tiny House” more closely resembles the caravan the G.O. and I aim to hook up and realise our great Australian dream of travelling around Australia, than what we consider a regular residence.

It’s not that we don’t do small… While our rented-from-my-sister 50 sqm 1 bedroom city apartment is bigger than the “Tiny House” the G.O. has referred to both it and our previous similarly compact apartment as “the kennel” not in reference to the nature of the inhabitants but to the lack of spaciousness of our abode.

Moving back alone to Sydney from the Central Coast over a decade ago I opted for an inner city studio loft apartment and left behind a 4 bedroom, 2 living area, double garage, deck & largish native garden surrounded residence I had shared with 1 husband, 2 cats and dog. To be fair the household catered frequently for extended family and all the rooms were used on a regular basis.

Not alone in inner city living suiting our work-centric lifestyle, apparently micro-apartments are a growing trend but there are times the walls close in and no amount of proximate cafes, pubs, shops, markets and parks compensate the delights of our country village verandah, backyard and views across the hills.

Because we straddle city-country lifestyle, as well as the apartment plus storage cage we rent 2 car parking spaces. If we didn’t have plans to relocate we’d keep only the G.O.’s ute he needs for work and a motor scooter. But country-village-no-shops-living 30 km from town will require a 2 car existence. So I hang on to my 18-year-old BMW and when I occasionally drive it out of the apartment building’s dusty underground car park I whisper sweet words to it about the nice rural life it will have one day soon.

At Taylors Arm our home is typical 1930’s, with 3 bedrooms, living room, kitchen, inside bathroom, ample verandah and small workshop on a sufficiently sized 630 sqm block. The original owners Ollie & Vin closed in part of the verandah, and raised  8 children in the house. Later additions were a shower-laundry and toilet out the back.

Modest size by McMansion standards, much of its capacity simply houses our belongings and is multipurpose, such as the third bed-study-dining-storage-room. As far as living zones, during warmer weather – most of the year – utilised in order are: verandah, bedroom, kitchen, back bathroom – a similar floor space expanse we’re accustomed to in the city.

Bigger smartphones are apparently better… “Apple has released a big phone. A really big phone. Samsung has had one for a while.” When it comes to the spaces we inhabit, I think we are heading in the opposite direction. 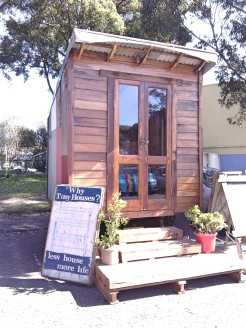 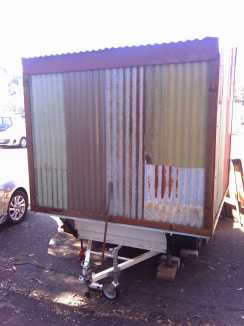 25 thoughts on “Be it ever so humble”

This site uses Akismet to reduce spam. Learn how your comment data is processed.

Looking for something in particular?

Wherever you go there you are…

After a decade of living in tiny apartments in the inner-city of Sydney, Australia with my husband referred to in my posts as the Gorgeous One (G.O.) while I worked in corporate-legal and the G.O. in civil earthworks we relocated 500 kilometres north in December 2015 to our home in the Nambucca Valley, NSW to follow our dream of living simply and creatively. In 2016 we did the great Australian road trip in our ute towing an old pop top caravan then settled in to applying our #LiveSimpleHomeMadeGrownLocalCreativeBetter philosophy to our lives and 1930’s house & garden. For the first few years I was a student: something I had long dreamed of. These days I’m one half of Sunshine Cottage Urban Permaculture, a member of Permaculture Australia, and part of a local community resilience network. I continue to learn, apply and share my experience in social media, permaculture, design and downshifting. From time to time, I write about day-to-day life, past & present, people & places, and take photographs with my smart phone for my blog and social media accounts @daleleelife101. Copyright © 2011-2022. All Rights Reserved. Content of http://daleleelife101.blog is copyright. Apart from any use permitted under the Copyright Act 1968, no part may be reproduced by any process, nor may any other exclusive right be exercised, without the permission of the owner who can be contacted via email dln011 [at] yahoo [dot] com [dot] au.

a chat over the garden fence

Wool, Wiltshire and All Manner of Wonderful Things!

One woman's meanderings around gorgeousness, health and organised living.

love planet, no money, no worries.

Caring For Earth So Earth Can Care For Us

Hand made, machine made, British made - she's on a quest to find out

Tales of quilting, gardening and cooking from the Kingdom of Chiconia

Living in Gib and Spain

Simple life on a little piece of land.

thekitchensgarden
Around The Mulberry Tree

Inspiration and tools for better blogging from WordPress.com

not so close encounters of the human kind

My art work and other musings

the passions of a science fiction writer

Pic a colour 4 Me

Every picture tells one

Just not another photoblog

a view through my lens

from the Bartolini kitchens

The latest news on WordPress.com and the WordPress community.

The Future Is Papier Mâché

Living well in the urban village

places, spaces and people in my amazingly bright life...

A few thoughts of little value

Philosopher Mouse of the Hedge

The Essence of a Thing