Mum’s mum, Nanna S. kept two letters written to her by my mother in an era when married and moved less than 40 kilometres away to live with your new husband’s family you wrote home. Nanna had her own reasons for saving these letters for me, but what I read in the lines of my mother’s handwriting were words describing as a toddler how much I loved my Dad.

Dad had his 70th birthday last week. I called him late morning to allow him time to indulge in the sleep-in I knew he’d have. “You made it” I greeted him. He responded with “I got up for my usual quarter to four piddle and wondered what day it was, and realised that… I made it”.  He knows better than anyone else no bookie would have given him odds on a 70th birthday celebration. 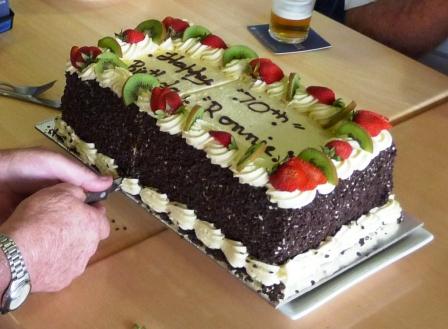 The day after his birthday, despite unseasonably cold wet weather every family member who could, drove hundreds of kilometres to turn out for the celebration of this milestone in our family history. My grandfather, Pa, born in 1913 died at 61, and my grandmother died a couple of years before him age 50.

Dad, the eldest son, surpassed this and leads the way. His two brothers only a few years behind, the cheeky buggers never let him forget, chipping at him with comments such as “what’s it like being old?” Dad bides his time until posing for a youngest–eldest photo he casually comments to his brother in regard to 4 month old Ethan “your grandson’s got more hair than you”. No matter his age, Dad’s still got more hair than his brothers, very little grey and no mercy in playing his trump card.

My aunt, the only sister and youngest, responds to Dad’s assurances that he’s now obedient and doing what he’s told, with “It’s about bloody time, you’re old enough”. To which I can only remind her, “It’s words, just words. He does what he wants.” Much as the siblings are alike, Dad never took to conforming. This could account for Dad’s birthday being a day I greeted happily but on which I also shed a few private tears… for there were many times I thought he wouldn’t make 50.

One of my first blog posts was about Dad, Ron: the year that was.  I introduced him by explaining “As my parents’ only child I often attempt to explain my relationship with Dad by saying I only have one team to barrack for. Whatever he does good or bad, he’s all I’ve got left in the way of parents. This gets him away with a lot. Dad can be infuriating & amusing, randomly & concurrently. The longer you’ve known him helps, sometimes, understand him but not necessarily. Often you are just perplexed.”

Coming up to age 23 when I was born he was a typical father of the Sixties. He worked as a motor mechanic, went to the pub, played sport and Mum & I tagged along. At almost age 40 when my first half-sister was born, he became a typical father also of the Eighties, starting a second family as I approached adult life. Mostly, Dad never fully acclimatised to modern father. I’m not sure if he attended the births of my three half siblings but at least with them [I believe] he attended the hospital rather than waiting at home for news, as he did for me in 1965. As they grew up, he didn’t like grungy hair, grungy clothes or loud grungy music. Dad continued as much as possible with Sixties style parenting but also did what he does best, coaching and running around to kids’ sport, following his own philosophy “the family that plays together stays together”… He grumbled a lot but predominantly ignored anything that didn’t fit with his view of the world. The kids are now wonderful adults some of an age to soon be starting families of their own.

For his birthday the G.O. and I gave Dad tickets to a show & dinner next month for him, my stepmother and us. After we’ll stay the night at their house and spend some time. However, I couldn’t allow Dad’s 70th birthday to pass without making him a little gift from me. I baked & assembled in an ordinary plastic container his favourite Rock Cakes, and dressed them up in a fancy box. Receiving the unexpected gift,  he looked at me questioningly “what’s this?” opened it & peeled back the blue tissue paper, laughed, looked around and said “Don’t think I’m sharing. These are going in my shed”.

And, although Dad received a great selection of birthday gifts, my true 70th birthday wish for him, is to “keep going”… so he can also be the Best Pa.

This site uses Akismet to reduce spam. Learn how your comment data is processed.

Looking for something in particular?

wherever you go there you are…

After a decade of living in tiny apartments in the inner-city of Sydney, Australia with my husband referred to in my posts as the Gorgeous One (G.O.) while I worked in corporate-legal and the G.O. in civil earthworks we relocated 500 kilometres north in December 2015 to our home in the Nambucca Valley to follow our dream of living simply and creatively. Easing into our new life, we spent much of 2016 traveling around Australia in our ute towing a caravan. Now we practise our #LiveSimpleHomeMadeGrownLocalCreativeBetter philosophy, work on our 1930’s house and garden, have a small veggie patch and a dog plus share a coop of backyard chickens with our neighbour. For the first few years I was a student: something I had long dreamed of. These days I'm a member of Permaculture Australia, and continue to learn, apply and share my knowledge in social media, permaculture, horticulture and design. From time to time I write about day-to-day life, past & present, people & places and take snapshots with my smart phone. Copyright © 2011-2021. All Rights Reserved. Content of http://daleleelife101.blog is copyright. Apart from any use permitted under the Copyright Act 1968, no part may be reproduced by any process, nor may any other exclusive right be exercised, without the permission of the owner who can be contacted via email dln011 [at] yahoo [dot] com [dot] au.

love planet, no money, no worries.

Caring For Earth So Earth Can Care For Us

Hand made, machine made, British made - she's on a quest to find out

Tales of quilting, gardening and cooking from the Kingdom of Chiconia

Living in Gib and Spain

Simple life on a little piece of land.

thekitchensgarden
Around The Mulberry Tree

Inspiration and tools for better blogging from WordPress.com

not so close encounters of the human kind

My art work and other musings

the passions of a science fiction writer

Pic a colour 4 Me

Every picture tells one

Just not another photoblog

a view through my lens

from the Bartolini kitchens

The latest news on WordPress.com and the WordPress community.

The Future Is Papier Mâché

Living well in the urban village

places, spaces and people in my amazingly bright life...

A few thoughts of little value

Philosopher Mouse of the Hedge

The Essence of a Thing